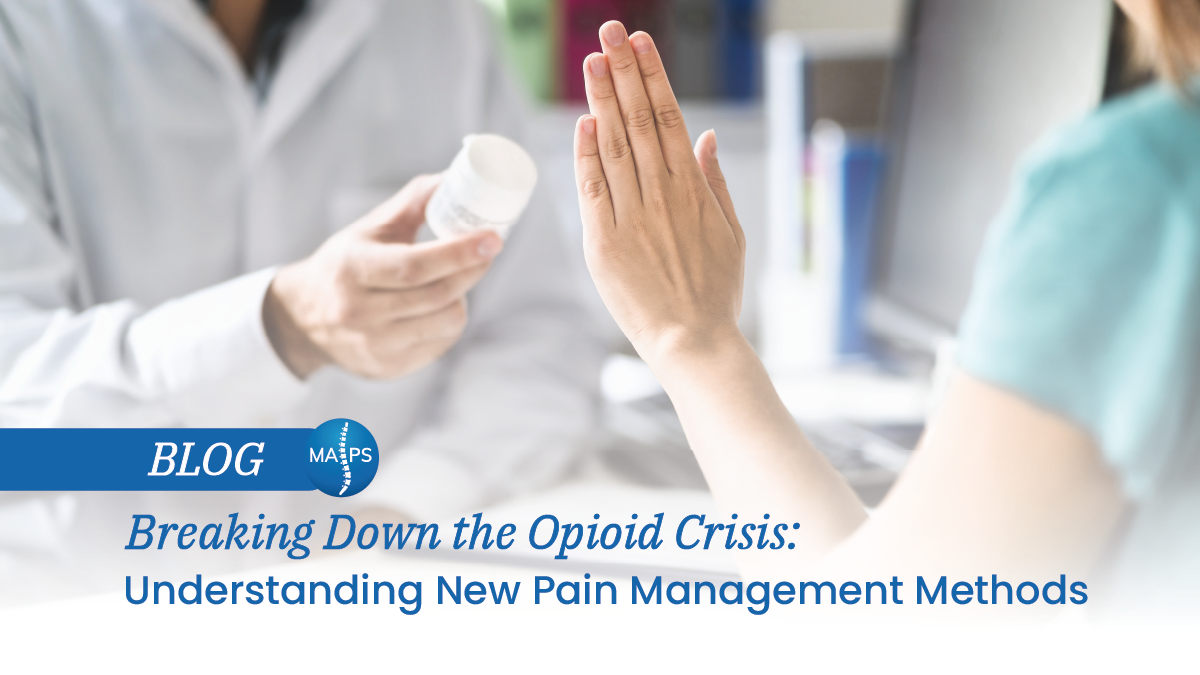 On October 26th, 2017, the US Government made a bold declaration: the opioid epidemic became a public health emergency.

Now in a pandemic setting, we have hallmarked a new record for overdoses and emergency room visits as a result of opioid misuse. With 93,980 drug overdoses in 2020 – up from 70,890 in 2019 – this has marked the biggest annual surges in more than half a century.

While opioids have a long and complex history and relationship with medicine, it’s worth understanding how and why we got here, and how new methods in Interventional Pain medicine may help to alleviate our nation’s dependence on opioids.

The History of Opioids and Pain Relief

Opioids are a class of drugs that are naturally derived from the opium poppy plant. By the 1860s, American chemists began to manufacture morphine – a more potent derivative of opium – and it was used as a painkiller and also as an anesthetic during the Civil War.

Realizing the addictive properties of morphine, chemists began looking for an alternative that was effective in reducing pain. Unfortunately, this led to the formulation of heroin – an even more potent and addictive opioid – for pain relief. In 1914, the Harrison Narcotics Tax Act was implemented – allowing such substances to only be acquired through a prescription.

While that tactic proved to be effective in the beginning, unfortunately, its success was not long-lived.

Since the 1990’s there have been three significant developments that directly contributed to and elevated the crisis we see today.

The first “wave” of the crisis was initiated when pharmaceutical companies began to research and manufacture increasingly potent versions of the opioid drug. Drugs such as Vicodin, OxyContin and Percocet were synthetic opioids, and pharmaceutical companies marketed them as safer, less addictive alternatives for pain management. Under this false pretense, the FDA approved these drugs to treat chronic pain. Care providers then began to write prescriptions for patients – even those with minor symptoms – thinking it was a safe treatment protocol. Between 1997 and 2002, prescriptions for these medications increased by 402% – leading to a dramatic increase in overdose deaths involving both natural and synthetic opioids.

In 2010, the opioid crisis took a turn for the worse. Many patients turned to illicit drugs such as heroin to satisfy their growing dependency. This led to a new surge of deaths, an increase in other diseases affiliated with intravenous drug use, and myriad social and economic problems.

A few years later, the illegal manufacturing of fentanyl made it become widely available as a street drug. Originally developed for end-of-life cancer pain, fentanyl is 100 times stronger than morphine – and its potency led to another surge of accidental overdoses and misuse.

What Can We Do Now?

Opioids certainly can, in specific appropriate cases, provide patients with medicinal benefits, however, these should be taken extremely carefully on a case-by-case basis.

With the pandemic indicating that isolation, social distancing, and other factors have led to another increase in opioid misuse, we can understand that communication and awareness of these issues must be a priority. Talk to your family and friends, and make the effort to help someone if they need it. Sometimes making sure there are no extra pills in the house can save someone from potential misuse or future overdose. The DEA has a program where it collects unused and excess prescriptions each year on the “National Take Back Day” – though you can find a collection site year-round by visiting their website.

New methods in Interventional Pain Medicine have allowed doctors to recognize, diagnose, and treat the actual cause of the pain – rather than masking it with a powerful and addictive drug. This has allowed for better patient outcomes, longer-lasting results, and overall improvement of health and quality of life.

As the trusted name in Interventional Pain Medicine in the Chicagoland area, we provide patients with healthy, long-lasting treatments that work. All of our Chicago pain doctors are double-board certified, fellowship-trained, and fully dedicated to helping patients live their best lives. To learn more, request an appointment today!